What is the Difference Between Rose Otto Essential Oil and Rose Absolute? 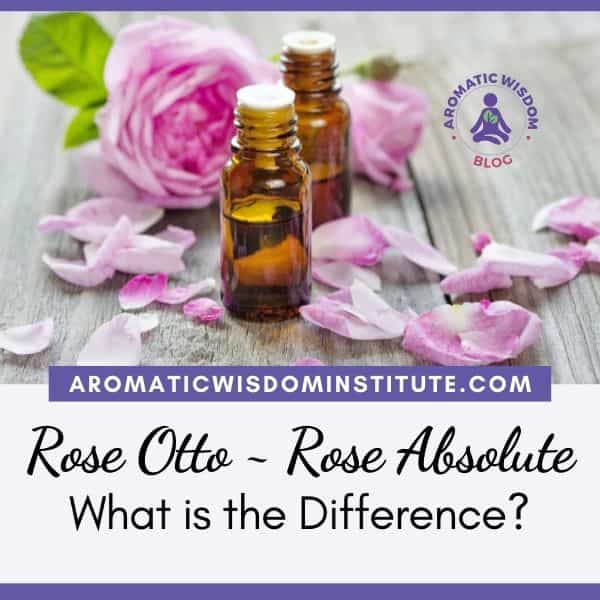 In every class I teach, as soon as Rose Essential Oil is mentioned I know the question will be asked about the differences between Rose Otto and Rose Absolute, and rightly so. They are often both available from the same vendor under “Rose Oil” and many recipes will specify using one or the other. They vary in aroma, color, viscosity, and price. If you don’t know the difference, it can be very confusing. I’m here to de-confuse you.

There are four methods of extracting the essential oil from rose petals:

Rose petals (usually from the Rosa x damascena plant) are placed in the pot of a distillation unit (most likely a copper alembic still) filled with water and slowly heated. As the water warms, the flowers release their essential oil into the steam that is pushing its way through the aromatic petals. This watery mist which contains essential oils, plant acids, and other components passes through a cooling condenser and eventually empties into a glass separatory funnel Inside the glass funnel, the essential oil floats on the surface above the water portion below (the steam transformed back to the water phase once cooled). The essential oil is collected and sold as Rose Otto. The name “Rose Otto” is derived from the “attar of roses” and dates as far back as the 17th century.

The aromatic liquid that remains is called Rose Hydrosol. Rose Otto tends to have a clear to very pale yellow color and a light, gentle aroma which lends itself well to wearing it as a perfume which is my favorite way to use it!  Be aware that Rose Otto becomes solid at temperatures below 21°C (69.8 °F) because the plant waxes present in the product begin to set.

First, the rose petals are placed in a drum with an organic solvent, usually hexane or toluene, and rotated. This draws out the aromatic portion of the petals. When the hexane has evaporated, what remains is a thick, waxy substance called a concrete (not used by aromatherapists).

Next, the waxes and non-aromatic components are filtered out of the concrete with ethanol alcohol, leaving behind an aromatic liquid called Rose Absolute. Solvent extraction gives a greater yield than hydro-distillation which is why Rose Absolute tends to be be a bit less costly than Rose Otto. The color of Rose absolute tends to be a dark orange to red with an intense rose aroma. It is preferred by perfumers and said to be closer in fragrance to the flower than an otto.

3. Supercritical Carbon Dioxide Extraction (CO2)
This is an expensive process involving some highly sophisticated equipment, but which offers superior oil. The rose oil extracted by this is considered truest to the original fragrance in the flower and may be called an absolute but should correctly be called a CO2.