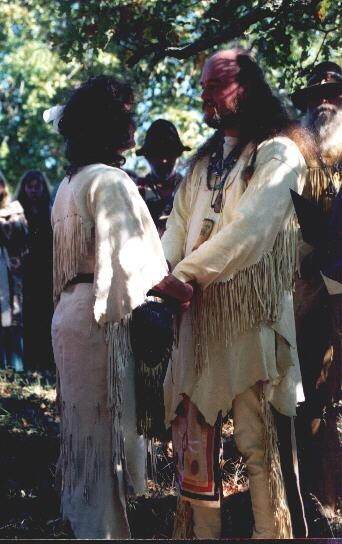 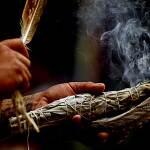 In a traditional Native American smudging ceremony, the clippings of dried herbs like sweetgrass, sage, pinon, and cedarwood are burned.  Participants gather the smoke and bring it toward the body.

The smoke is said to purify, offer spiritual healing, ward off negativity and attract positive energy.  Sometimes, one person will smudge another using their hands or a feather. I learned all about smudging from my husband, James “StandingBear” Fulcher. James and I frequently smudge each other when we’ve had cross words, been ill or just want to cleanse ourselves and our home of negative energy. We were married in a traditional Lakota Ceremony in Oklahoma in 2001, and the night before our wedding we were smudged by “Red Shirt” a Lakota Shaman and dear friend to bring in positive energy to our union.

Smudging without the Smoke 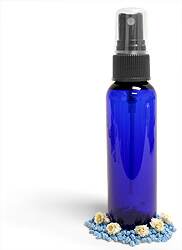 Sometimes you would like to cleanse a space, or your physical body but using smoke isn’t practical.

Picture this:  You’ve had a disagreement with a co-worker and you feel dumped on, angry and frustrated.  You have the sense that there’s toxic energy in your office. You pull out your bundle of sweetgrass and other dried herbs and light it. You walk around cleansing the room. Your office quickly fills with smoke. The fire alarm sounds. Everyone runs around in a panic until someone discovers your little purification ceremony is the cause of the chaos. That really won’t work at all.

If you want to smudge and creating smoke isn’t practical, use a hydrosol! I wrote an earlier post about hydrosols here. Because plant energy and personal intention are the foundations of this practice, using the plant in another form can be just as powerful.

Why Sweetgrass and Sage Hydrosols?

Sweetgrass and Sage happen to be my personal favorites when it comes to using hydrosol for energetic cleansing.  They are made from the plants that are traditionally used in smudging.

Here is what Marge Clark of Nature’s Gift Aromatherapy has to say about White Sage hydrosol:
“This is the white sage that has been used for millennium by Native Americans for ritual, smudging, and healing. Those sensitive to the energetics of the oils and hydrosols will be amazed by this White Sage water…and find a hundred uses for it. We already are using it to clear crystals, Debi is going to use it instead of smudging when she’s in a place that burning sage is not advisable.”

Therapeutic and Energetic Uses of Sweetgrass and Sage Hydrosols:

To order hydrosols and essential oils from the outstanding Natures Gift Aromatherapy, just fill out the form below and I’ll send you the discount code just for reading this blog post 😉

Check out my Online Course – Hydrosols for Health